Corn snake vs ball python – Which pet snake is better for beginners? 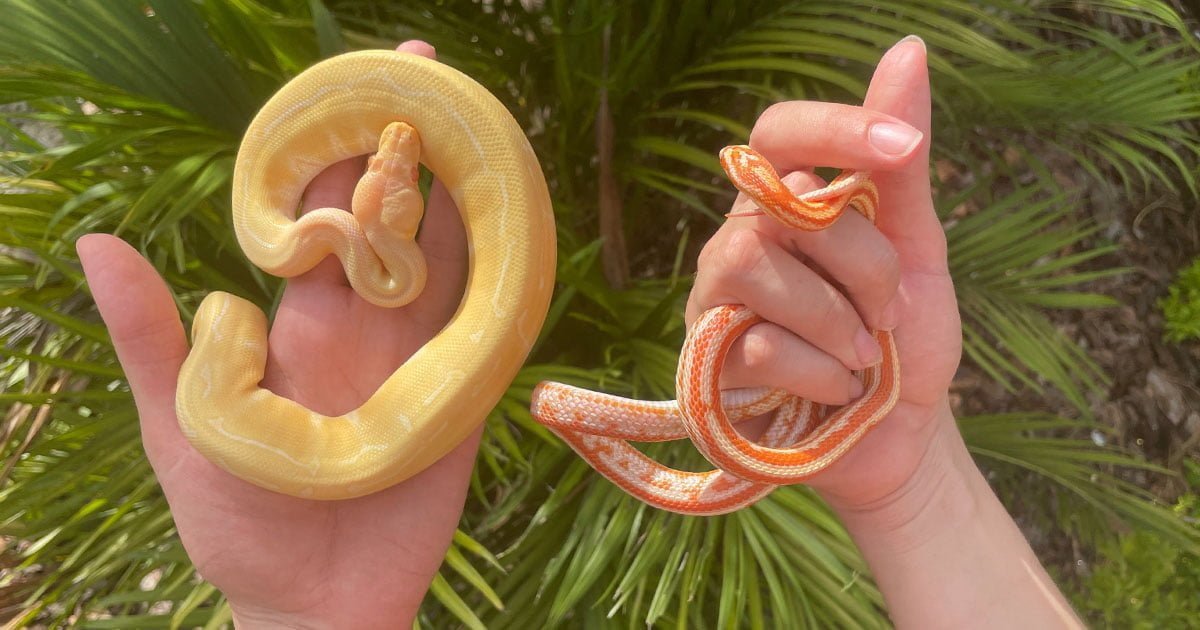 Within recent years, there have been two types of snakes that have gained massive popularity in the pet world. These would be the corn snake and the ball python. Naturally, you may be considering acquiring one of these brilliant reptiles to add to your home. However, you may still have some questions on what owning a corn snake vs ball python is truly like. How do their personalities and appearances compare? Does one make a better “first time pet” than the other? These are, indeed, important and responsible questions for anyone getting into the reptile hobby to ask.

With this guide, we will help to differentiate these two snakes, and hopefully provide some guidance on which may be better for you at this time.

About the Corn Snake

Corn snakes (Pantherophis guttatus) are a moderately sized rat snake originating from the Eastern US. Being the predator of a variety of small animals, they play an important ecological niche wherever they inhabit. They are said to get their name from the corn-like patterning on their bellies. While known to climb trees, these reptiles would prefer to relax in a burrow on the ground.

If you are looking for a longer lived companion, these snakes are certainly on your side. When cared for properly in captivity, they have the potential to live for 20+years.

About the Ball Python

Ball pythons (Python regius) are a slightly larger snake that originate from Central and West Africa. They inhabit ecosystems that vary from open grasslands to forests. During the day, they typically prefer to take shelter in a shady burrow or stay by a cool body of water. They are typically nocturnal or crepuscular, which means that they are more active during the cooler hours between dusk and dawn. Like the previously mentioned corn snake, these are non-venomous constrictors. Like the corn snake, these animals can live for several decades in captivity.

When attempting to choose a snake, appearance will most certainly be an important deciding factor. Aside from aesthetic preferences, an animal’s physical form will determine how big it is going to get, and how it should be handled.

Considering this, it is important to remember that corn snakes and ball pythons are two completely different animals with differing looks. The ball python, for instance, is typically spotted with browns, yellows, and blacks (unless you acquire a fancy morph). The corn snake sports more vibrant oranges, reds, and yellows that show up across more morphs.

Naturally, the differences run further than skin deep. Here are some basic stats to consider between the two:

Build: Ball pythons generally have a much stronger, thicker build than corn snakes.

Now, if you’re looking for a threatening, somewhat aggressive animal as a pet, these reptiles… simply won’t fit the bill. They would both much rather lazily relax on your arm than attack something. The truth is, if these snakes didn’t have a great temperament to match their looks, they wouldn’t be nearly as popular as pets. As long as your snake is socialized properly from a young age, these animals are tolerant of human contact.

As far as direct differences go, these snakes can be fairly similar. However, the ball python is generally a bit more laid back. One quirk that is unique to the corn snake is their occasional habit of “musking”. This is essentially their defense mechanism of expelling a foul smelling odor when threatened. However, they should grow out of this fairly quickly. Especially when they’re more comfortable in their new home.

Overall, both the corn snake and ball python would make excellent companions that would thrive in a variety of homes. In other words, you can’t truly say that one is “better” than the other. When considering a ball python or corn snake for sale, it is important to consider your own aesthetic preferences as well as your ability to accommodate your animal. While their feeding and housing requirements may be similar, you will still need to tend to the unique needs of your pet. Of course, researching and sourcing your pet from a reputable breeder will be paramount.

Regardless of which ball pythons or corn snakes for sale you eventually choose, be sure to give it time to adjust to its new environment. Before you know it, you will see your pet’s personality blossom into something wonderful and unique.

« Where to buy isopods?
How long do ball pythons live? »