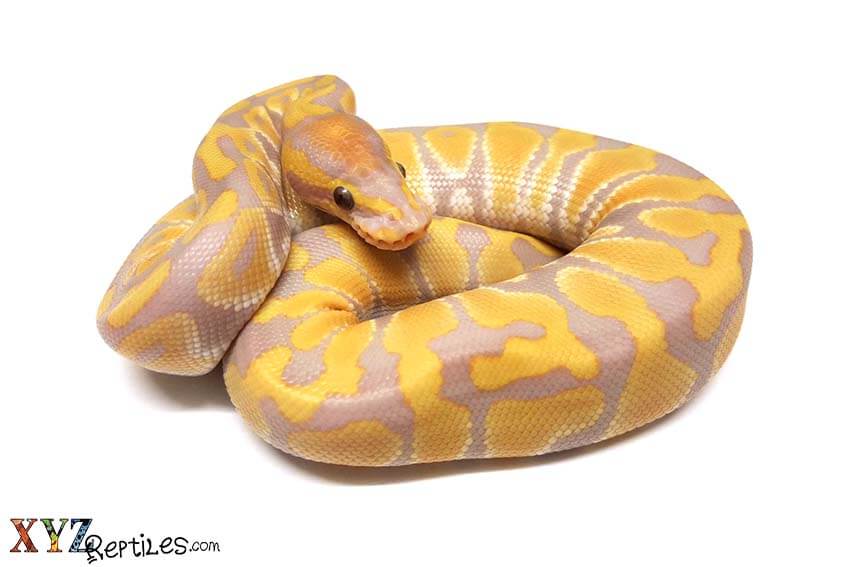 In the last few years there has been an intense explosion on the ball python scene of some brightly colored animals that includes the banana or coral glow, the toffee or candy and the mind blowing rainbow ball python. They all have different beginnings but what they seem to have in common is an ability to make most morphs so much better and to constantly turn heads.

Much like the butter and lesser two sided morph there is an overlap and distinction of Bananas and Coral Glows. They had different origins from Africa and were bred and developed by two different US breeders. They have almost identical characteristics and are impossible to tell apart when presented in a mixed group. Both will slightly dull with age and develop some black flecking but the combinations made so far like the Pied and clown combos and dozens made every breeding season make this morph a must have for seasoned breeders and new reptile keepers alike. What’s unique with these two morphs is their ability to have some males that make mostly males and others that make mostly females. Although most questions have been answered in other ball python mutations there is still much to be discovered about these two fantastic ball python morphs.

Similar to the Banana and Coral Glow origins the story of the Toffee ball and the Candy Ball involves two separate adults from Africa being purchased and developed by two different breeders in the US. There seems to be overlap in color and intensity between these two recessive morphs and they are very similar in their appearance but things get a bit weird when they are crossed to common albinos. Apparently they will act like a codominant morph when bred to each other and to albinos making candinos and tofinos but are clearly a recessive mutation when bred to anything else. Much like the bananas and coral glows they tend to have amazing colors that intensify with age and are a must have for people crazy about or involved in expanding the albino color morphs.

The Rainbow Ball Python and Its Intense Colors

Much like the other ball python morphs we mentioned the Rainbow Ball Python was developed by two different breeders but unlike the others it did not come from an individual animal in Africa. The roots of this morph are still a mystery but they can be traced back to some Enchi offspring produced by a breeder in the US. These amazing looking snakes occurred almost simultaneously in America and Europe and have been sought after ever since. The rainbow is recessive and other than a couple of combinations so far a completely open book with many unwritten chapters. Look for the xyzReptiles table at the National Reptile Breeders Expo later this month where we will have a couple of gorgeous babies for display and potential sale. If you have questions about any of these or other morphs feel free to contact us any time.