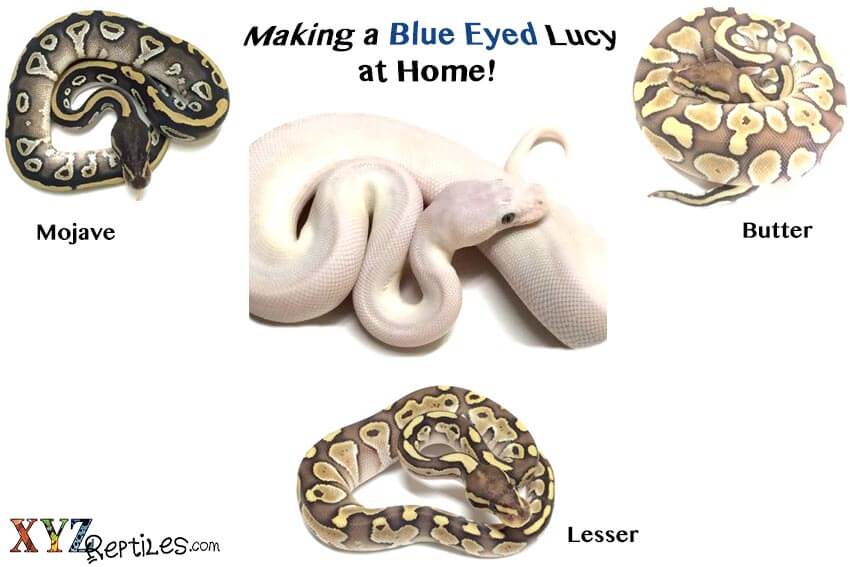 For many of our customers that are new to the hobby it is an outlandish idea to think of spending more than the cost of a luxury car on a snake. There was a period of time not too long ago that people were racing against each other to spend tens of thousands of dollars on the ever elusive white snake now known as the Blue Eyed Lucy. This was before the breeders found out there are multiple ways to make such a snake and today we are going to look at some of the basic ways of doing this. If buying a baby Blue Eyed Lucy is out of your reach, here are three affordable ways of doing it at home.

The Mojave Ball Python and Its Many Uses

The Mojave Ball Python has been used to make a variety of interesting snakes from the Purple Passion to the Crystal Ball and more, but the most popular combination happens to be the solid white snake. The Blue Eyed Lucy can be made using this gene and crossing it to anything from a Lesser and Butter to Mochas and Russos. You can make a BEL by breeding two Mojaves together but the Super Mojave Ball will have a grey colored head and neck, which may defeat the purpose. Crossing a Mojave Ball to a Mocha or Russo will produce a solid white snake for a fraction of the cost of buying one.

There has been an ongoing debate about the difference between the Butter Ball Python and Lesser Ball Python. Most people may not be able to tell them apart and due to genetic variation in all living things, there happens to be some overlapping color characteristics in the two animals. The truth begins to emerge when you add other genes in to the mix and as the results start to deviate from each other it becomes clearer to see that the two genes are not the same. Super Butter Ball Pythons are a great looking white snake but just like the Mojave gene it is possible to achieve a BEL by breeding any of the aforementioned morphs to the Butter gene.

The Lesser Ball Python and Its Combos

The Lesser Ball Python has been used to make some really amazing combos over the years. It is an important part of making everything from Soulsuckers and Kingpins to Lesserbees. Like the first two genes we discussed Lesser Ball Pythons can be bred to multiple different mutations to make a solid white snake with blue eyes. At xyzReptiles we have a special category dedicated to Leucistic Ball Pythons and the animals that are used to make them. They are a popular item on our site along with the many different color mutations available on the market today. If you are interested in a white snake or would like to make your own don’t hesitate to contact us and see what we have currently available.