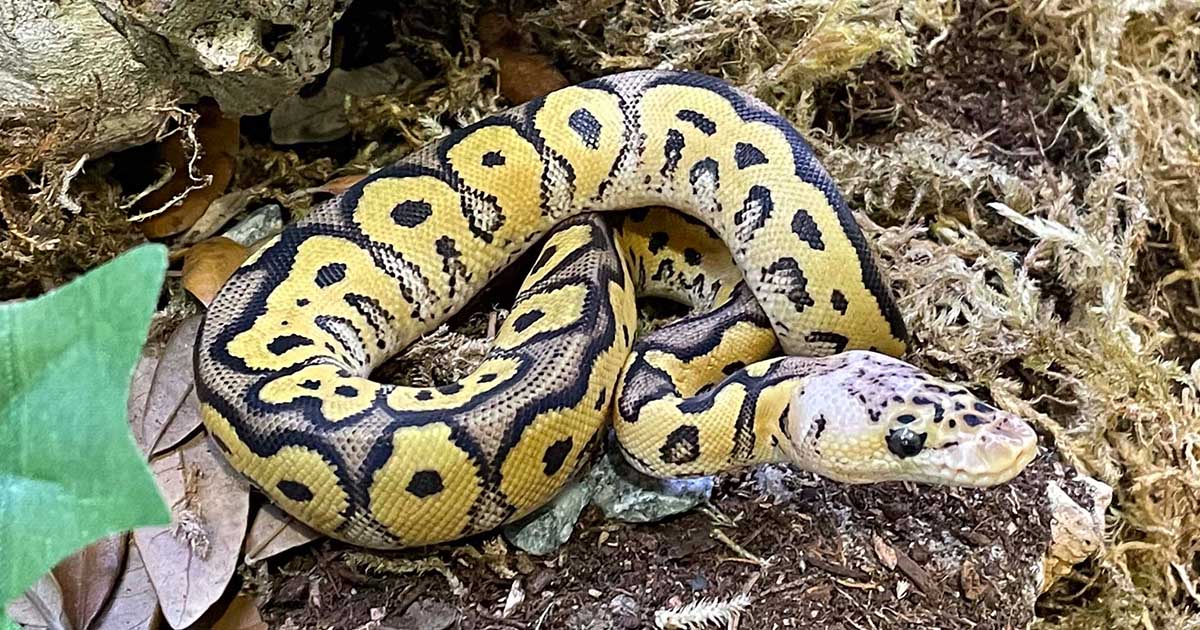 So, you’re looking to own a ball python. Right now, you’re unsure on whether they’re safe or not, and you may be asking questions like “are ball pythons venomous”. After all, we all understand how dangerous venom can be. It’s natural to be a bit threatened by it and animals that can produce it.

By learning a little bit more about what we don’t understand, we can grow a greater appreciation for it. We may even find that there’s not much to be scared of after all.

When most people think of snakes, they think of venom. Therefore, many people find themselves fearful of all snakes. Feeling threatened by the possibility of coming across an animal that can cause serious injury or death is natural, after all. However, of the 3000 snakes that exist in this world, only around 10%-15% are venomous. Unless you live in an area with a high concentration of venomous snakes such as cottonmouths or rattlesnakes, you are unlikely to come across a particularly dangerous one.

Venom itself is a highly useful material in the medical world. Even beyond the commonly known application of making antivenom. The drug Captopril (a medication used to treat high blood pressure), for instance, is created from the venom of the Brazilian viper.

How Can You Tell?

There are some commonly seen physical characteristics among these snakes. It may be useful to review them to assess whether or not a ball python is venomous.

Of course, this is just a general guide. Some non-venomous snakes exhibit some of these characteristics, and vice-versa. As always, it is best to avoid interacting with any snake you meet in the wild. Can you think of any other snakes besides the ball python that may or may not be venomous based on these physical attributes?

At this point, I would like to emphasize that no commonly available pet snake will be able to envenomate you. While some pet snakes – such as the hognose – are capable of producing a mild venom, they are completely harmless to humans and other pets. While some snake experts and researchers are capable of caring for these animals, they should not be kept by the general public.

What Makes a Snake Venomous?

You can think of venom as a type of specialized saliva produced by a specialized salivary gland. When it wants to envenomate something, the material is squeezed out with muscles that lay around the area through hypodermic-needle like fangs.

Venom itself comes in many different “flavors” and varying amounts of deadliness. Some snakes have fangs that aren’t even capable of puncturing human flesh. Some may even choose not to release any venom at all, as it is hard to produce fluid that takes quite a bit of energy on the snake’s part.

Out of the many snakes in this world that have spent the time and energy to produce venom, the ball python is not one of them. These snakes belong to the class of snakes known as constrictors. As the name suggests, these reptiles have evolved muscular, strong bodies capable of navigating their environment and squeezing their prey until it’s ready to eat. This is simply the path that evolution carried them on. You will never see a ball python for sale or in the wild that is capable of producing venom.

As further evidence for their general harmlessness, let’s look at the general temperament of a ball python. This is a docile, laid-back snake that is extremely tolerant of handling. They would much rather hang out on your shoulder for hours than pick a fight. These reptiles are also happy chilling in their enclosure for virtually their entire lives, and require minimal interaction from you. Ball pythons are popular pets for a reason. In general, they are less dangerous than many animals that make for more typical pets. To learn more about various other snakes that can make good pets, read “Top 5 Colubrid Snakes“.

Final Thoughts On The Question Of “Are Ball Pythons Venomous”

Owning a ball python can be a wonderful, exciting experience for both pet and owner. However, it is still important to ask questions such as “are ball pythons venomous” if you’re unsure. There is no such thing as a question that is “too basic” or “dumb”. Understanding the essentials of your pet’s care and temperament is the best way to set yourself up for success. Before you know it, you’ll know exactly what you’re looking for when researching ball pythons for sale. Want to learn more about ball pythons and why they make good pets? Check out “Are ball pythons good pets“.

« How much does a Kenyan sand boa cost?
Where to buy reptiles near me? »