Cecil the Lion a “Lion by Any Other Name” 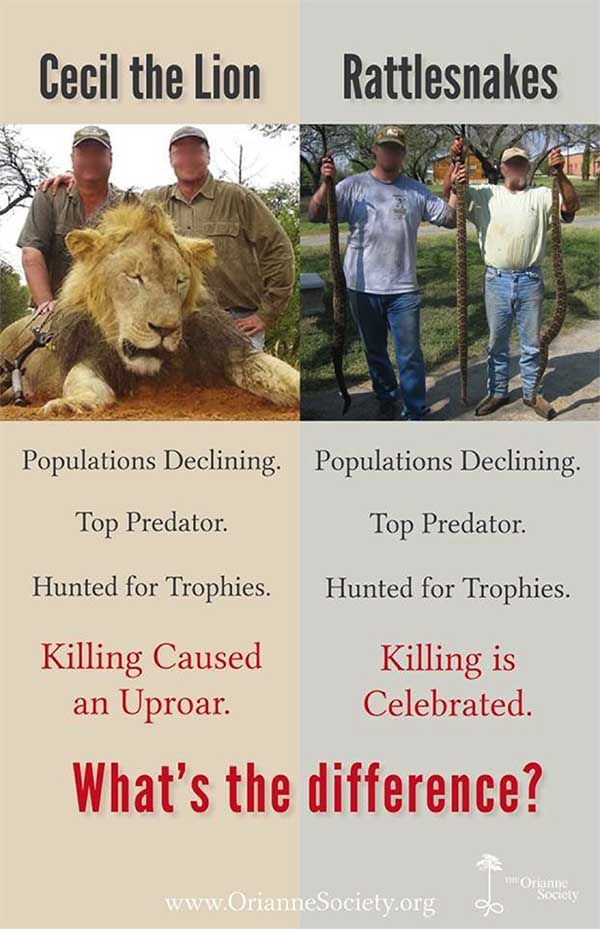 I have been asked by many friends and acquaintances in the last two weeks about my take on the Cecil the Lion situation. I have reserved my thoughts on the matter for the most part due to how polarizing it can be. I’ve decided to look into the subject and list a number of facts and then talk about a problem we have much closer to home.
There are three facts that I want to address and then get your feedback on.
Fact: Male lions live between 10 and 14 years in the wild due to injuries they sustain fighting each other and other animals. Cecil was 13.
Fact: In African countries where Lions live in the wild more than 100 lions are killed each year by farmers and ranchers whose livelihood is threatened.
Fact: The United States is the biggest importer of trophy Lion heads and skins and each year over 500 such trophies are brought into the country.
Having said this I think that is was a shame that such a magnificent animal had to die due to unnatural causes but should we be outraged just because he had a name and was on television? Especially when he is one of hundreds of lions killed every year.

Then I happened to see the picture I posted above on a friends Facebook feed. It made me realize that if we are upset about senseless killing and wasteful destruction of nature we have a lot of work to do right here at home. All you need to do is search the phrase rattlesnake roundup 2015 and you will find lots of links to county fairs featuring rattlesnake roundups that date back 50 or more years. These roundups have been cleaned up and tout their educational value and make the argument that they are teaching people about the value of animals in nature but at the end of the day they end up removing these snakes from their original homes and if not killed then they are displaced and who knows what happens to them after that.

At xyzReptiles we promote the ethical and appropriate keeping and housing of reptiles and amphibians. Most of the animals we work with are captive produced or farm raised to reduce the burden on wild populations. We want to better our industry and promote our values to newcomers to the field of herpetology. We would love to hear from you and have you join us in this animal conservation endeavor.