Panther Chameleons as Pets & Their Care 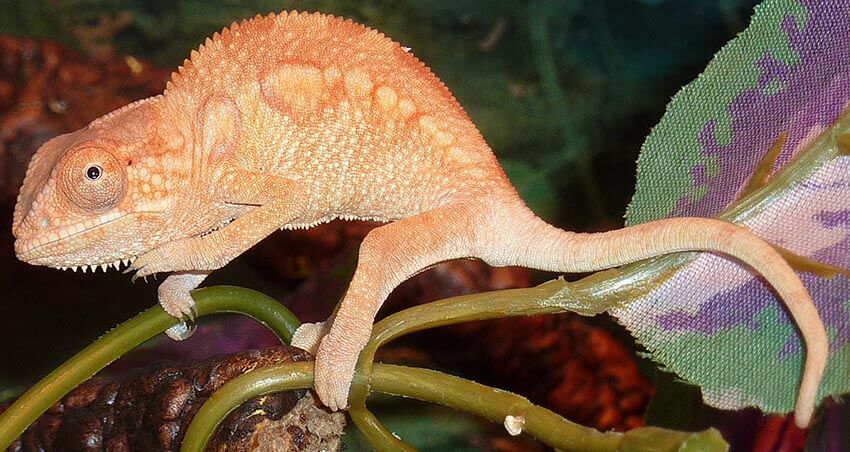 Some of the more desired and more beautiful of the pet lizards for sale are panther chameleons. These gentle creatures are undoubtedly one of the nicest looking lizards in the world and can be seen in popular movies and commercials selling everything from paint to beer and finding their way into many a child’s imagination as a magical creature than can mimic any color it comes in contact with. Although this is more myth than reality, panther chameleons are one of the brightest colored reptiles in the world and have an amazing range of colors and shades in their natural wild-type spectrum. The males of the species are always larger as adults and much more colorful than the females but they all start out looking almost indistinguishable from each other.

Panther Chameleons originally come from the north eastern tip of the subcontinent of Madagascar. They are named for their bright colors that resemble a panther with its spots and stripes. Like most other living things in Madagascar their future depends entirely on the efforts of people from around the world that strive to protect and sustain the vanishing flora and fauna of this once fully tropical region. In the wild Panther chameleons are found in heavy growth tropical forests and vary in coloration and pattern from region to region. It is important to learn about proper panther chameleon care since these amazing animals are recommended for more experienced keepers, some of these steps must be strongly adhered to. In captivity a large screen enclosure with plenty of vines, branches, and leaf cover is a must. Proper lighting in the form of basking and uvb is also essential as well as a varied insect diet that is calcium fortified. It is important to use a higher rated uvb light and a higher weekly dusting of calcium powder when raising panther chameleons indoors where they do not have access to natural light..

As mentioned before the heavy burden of survival of the local people in Madagascar has taken a toll on the country’s natural animal population and it is very important to source your panther chameleons for sale from a captive bred and produced source. Most captive bred panther chameleons in the United States had their starting bloodlines as imported animals from localities such as Ambanja, Nosy Be and Sambava but have since been domesticated and are helping to ease the burden on the wild population. At xyzReptiles we have partnered up with a breeder who is producing a large number of animals overseas in natural outdoor enclosures and importing these specimens as sub adults to ensure they are healthy and strong as future pet chameleons.