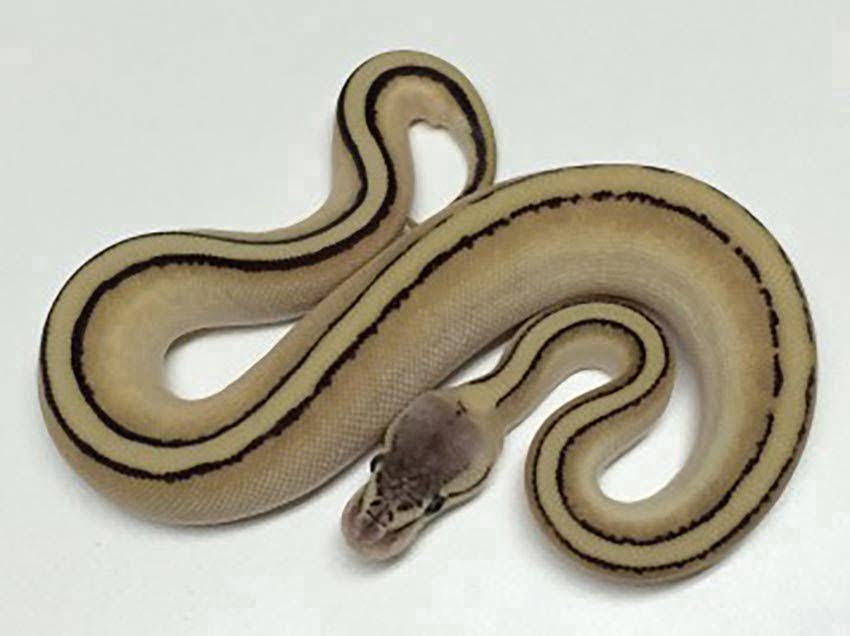 Most people look at the Genetic Stripe Ball Python and all they see is a striped brown snake. When I look at the same snake I see an opportunity to create natural art by using nature’s paintbrush to make some of the most distinct Ball Python patterns out there. This is why I am working with and will continue to work with and develop new striped combinations.

You can go to almost any site or any weekend reptile show and see a Genetic Stripe Ball Python for Sale for way too cheap these days. Most breeders have considered them a dead end and have sold off their hets as normal and their visual females for whatever they are offered. This is a shame since some of the best looking combinations have been Genetic Stripe crosses. Take for example the Lavender Albino Genetic Stripe or the Banana Genetic Stripes as some of the more extreme examples of this gene. Then consider the fact that this is the only Ball Python morph that has distinctly separated areas from head to tail that can have their own color or a blend of colors to create the most clear and crisp overall pattern.

There are many Ball Python Morphs available on the market and everyone has their one or many favorites. By adding more and more genes to the Genetic Stripe Ball Python you end up with a stacking effect where pastel and butter will work together to make a snake that is more beautiful than each of those individual combos. Then you can add cinnamon or black pastel to remove the stripe or add yellowbelly to create orange flames along the sides. I don’t know about you but when I’m given the chance to make a snake that has never been seen in nature before and I’m almost guaranteed an option of multiple colors working together I tend to take it.

If you have never owned a Genetic Stripe Ball Python now is the perfect time to get into the hobby where you can own and make some truly remarkable new combos. These snakes are easy to work with and breed and the Genetic Stripe is a great way to start. At xyzReptiles we have put together a Genetic Stripe and combos section to make this process easier for the beginner snake keepers. We are also available seven days a week to answer questions and give helpful hints in keeping and breeding these beautiful snakes. Happy Herping everyone!

« Is a land tortoise the right reptile pet for me? A look at the Burmese Mountain Tortoise vs some of the other land tortoise species.
Have you seen the Witblits Bearded Dragons? Something new and exciting in an otherwise over farmed market. »