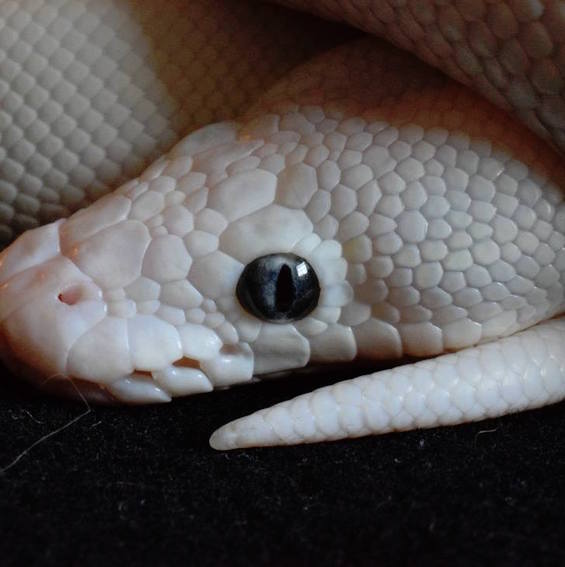 The Blue Eyed Leucistic Ball Python is not only a crowd favorite but also our number one selling snake and when you consider all of the potential that one of these snakes holds it is easy to see why they are so much more than just a beautiful white snake. There are many different ways to make a white snake and in this article we are going to focus on the Latte, the White Diamond and the super Mojave. When combined with some of the other base ball python morphs these simple looking patternless and colorless snakes open up a whole new world of possibilities.

The Phantom ball python and its mysterious combos

As the first of the few single gene morphs to be bred into the BEL (Blue Eyed Lucy) complex, the Phantom Ball Python set of an avalanche of great looking combos. By itself, the Super Phantom is a mysterious and oddly colored purple and yellow ball python. When bred to a Mojave Ball Python you have the amazing looking Purple Passion combo which is a lighter version of the Super Phantom. Next you have the Leche Ball which is made by breeding a Mocha Ball to the Phantom and produces a much cleaner and brighter version of this complex. It is interesting to see the similarities and differences created when such closely related morphs are crossed.

The Mystic Ball Python was the next player in the lineup to be combined into the BEL complex. There was no shortage of pleasant surprises as the Mojave combo AKA Mystic Potion was produced. The surprises kept coming as the Invisiball was made with a Russo het breeding and the Elixir with a Mocha breeding. On the surface these snakes seem to be different shades of the same overall look but that is the very heart of the matter because now you can control not only the color but the depth of the brightness and shading of the end result by switching different genes on and off. It is important to note that the Butter cross and the Lesser cross tend to produce solid white snakes and take away the mystical aspect of these breeding projects.

Although the Mojave Ball Python is an important part of making Potions with Phantoms and Mystics, it too will make a very clean solid white snake when bred to a Mocha or Russo Ball Python. This seems a bit confusing as the very same snakes that bring out the yellow and purple colors in other combos will make the opposite of what you’re after so it is important to know the exact genetics of the animals you are getting so that you can come up with the crosses you’re after. At xyzReptiles we take great care to know the animals we are breeding and also the select group of breeders we purchase from to deliver the right genetics to our customers. We have also placed all of these animals related to the BEL complex in our category named Leucistics & Combos to help get our customers to the correct animals needed for their projects.

« The Spotted Python, Children’s Python and other small Australian Pythons
Has the end come for reptiles for sale online? »