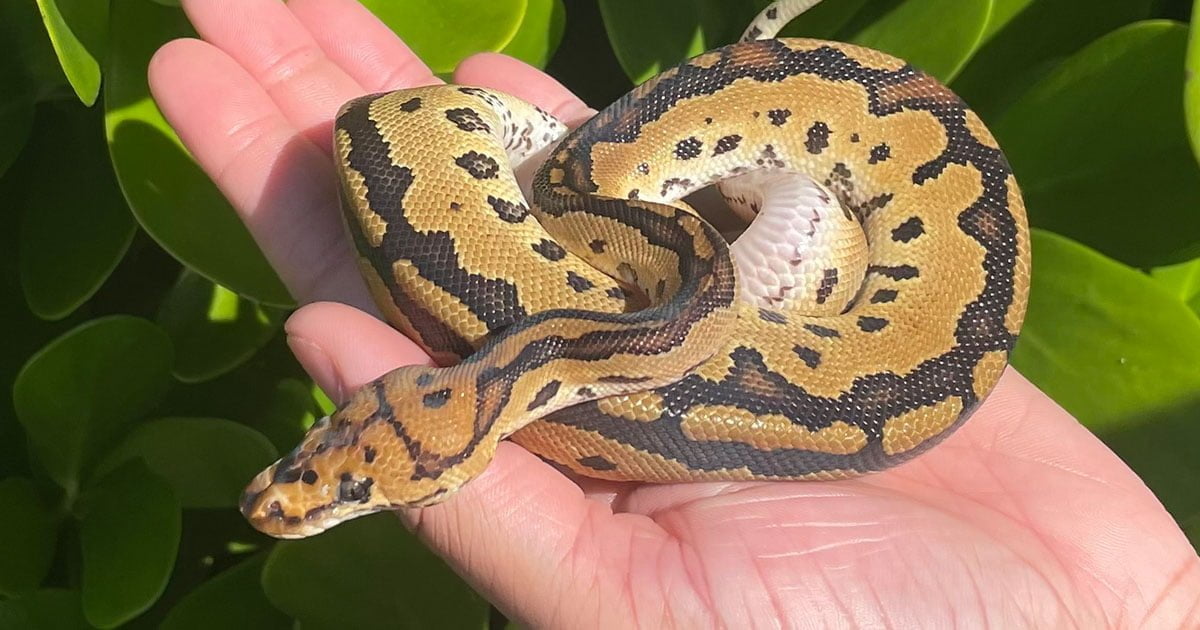 If you’re in the market for a laid-back new pet, consider these friendly snake breeds. Some snakes have sweeter dispositions than others. The key to raising a pleasant snake? Knowing the temperaments, quirks, and reputations of certain species. Whether you’re a reptile beginner or a seasoned serpent expert, it’s natural to want to come home to a friendly pet.

Qualities of a Friendly Snake

If friendly reptiles are what you seek, you’ll find it no coincidence that many of them are also the same ones that are ideal for beginners. While differences in personality can be traced to different species, there are other commonalities between friendly snake breeds.

Size tends to conflate with a snake’s level of aggression. Smaller snakes tend to be more docile, however, this doesn’t mean that all large snakes are mean or violent. They simply might be more combative but that doesn’t mean they automatically view humans as something to be attacked.

There are a number of reasons why ball pythons are one of the most popular pet snakes in the industry. One of the main ones is their sweeter-than-honey disposition. One possible reason is the result of several decades of breeding by humans.

Ball pythons are one of the first snake species to go relatively mainstream and have been bred for decades. Not only has this resulted in literally thousands of beautiful and intriguing ball python morphs, but these snakes are very comfortable around humans. Balls are one of the most social snakes and are much more tolerant of handling than other species. Whereas most snakes can only take being handled–well, handling–a few times a week for a short period of time, ball pythons can be handled daily, sometimes for hours at a time.

In addition to being docile, and even-tempered, they’re also naturally non-aggressive. In the wild, these snakes curl themselves into a ball. It’s their go-to defense mechanism when faced with a threat and also where they get their namesake from. Unlike other snakes that may hiss or strike when agitated, the meek ball python will simply curl itself up. They’re very friendly and also a very safe pet snake choice.

Another of the friendly snake breeds happens to be the champion of beginner-friendly snakes. Corns are heralded as the number-one pick for first-time reptile owners. These thin-bodied snakes are a very manageable size, have super simple care requirements, and are as inoffensive as a snake could possibly be. Corn snakes are very docile and don’t have an aggressive bone in their body. They’re also considered one of the calmest snakes in the pet trade.

Furthermore, these friendly snakes are also comfortable with human interaction and are above average in sociability. Feel free to handle a corn snake daily if you so choose. Are you a more hands-off type of pet owner? You’ll appreciate that corn snakes aren’t a species that constantly need handling to keep them tame. However, corn snakes are known for being rather timid so it might take them a bit of time to warm up to you. Once they’ve become comfortable in their surroundings, they can be inquisitive little creatures that enjoy exploring their tanks.

Kingsnakes are another very popular choice that are also friendly snake breeds. They’re one of the largest snakes that are commonly recommended for beginners. Beautiful and elegant, the iconic look of this species is one of their biggest draws. The other? They’re friendly nature.

Kingsnakes can be docile and quite social, however, they’re not necessarily that way out of the gate. They can be a bit feisty at first and might hiss or rattle when they feel threatened (though there’s little risk of them biting and causing any actual harm). Kingsnakes need to be tamed to unlock their winning personality.

This can be accomplished through regular handling, once every few days for a few minutes at a time. They acclimate to human interaction quite quickly, so it’s not going to be a long-term project. Those who are willing to put in the work and handle their kingsnake consistently will find themselves with a charming pet. They’re so tame and docile that they’re even suitable to be around children.

Ready For A New Pet Snake?

You can’t go wrong with choosing a ball python, corn snake, or California kingsnake as a new pet. These friendly snake breeds are pleasant and tons of fun to interact with. They also offer the advantage of being very low maintenance and not taking up a lot of space. You can find everything you need (including the snakes themselves) here are XYZReptiles.com.