Home > Reptile Articles > What is the fascination with the beautiful Indian star tortoise?

What is the fascination with the beautiful Indian star tortoise? 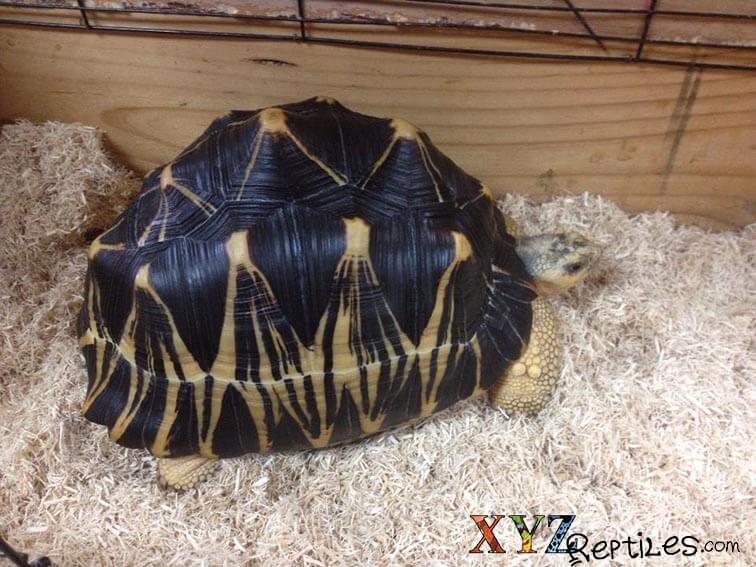 There has always been a fascination for tortoises amongst people of all ages and background. This may be due to their peculiar way of carrying their protective domed shells around with them or their slow and intently focused movements. For me the love for tortoises starts with their intense enjoyment of a piece of fruit and goes on from there. The Indian Star Tortoise and Radiated Tortoise are both on the top of my favorite reptiles list.

I have had the pleasure of raising and keeping both over the last several years and would recommend them to any serious reptile keeper. It is a shame to realize that in some corners of the world they are prized more as a meal than a beautiful part of nature but through some education and understanding I believe that this can be changed.

The small but beautiful Star Tortoise

The Indian Star tortoise (Geochelone elegans) is a beautifully patterned herbivorous species of tortoise found in India, Pakistan and Sri Lanka. It sustains itself on a diet consisting of grasses, flowers and fruit and like the red footed tortoise will occasionally eat carrion. They grow to a medium to small size of ten inches and have an irregular shaped carapace. It is thought that this helps the animal roll upright in the rough terrain of the scrub forests where they are found.

Indian Star Tortoises are bred in captivity very regularly in the United States and are available in the pet trade on a consistent basis. A large reason for their availability is the fact that breeders prefer to work with them since they are allowed to be shipped across state lines.

Unlike the Indian Star tortoise, the Radiated Tortoise (Astrochelys radiata) comes from the island of Madagascar, grows to an adult size of sixteen inches and is mainly a grazing animal sustaining itself on a diet of grasses and cacti. Even though they are considered one of the most beautiful tortoises in the world, captive collections of these threatened species are rare due to strict laws meant to protect them.

We are a strong supporter of laws that are based on facts and reality. Unfortunately when you suppress the captive production of certain species through paperwork and regulations while turning a blind eye to the loss of habitat and poaching that is the real threat, the end result is the eventual extinction of the species. At XYZReptiles we carry a wide array of reptile species and plan on providing both the Indian star Tortoise and the Radiated tortoise for sale to the public through legal means and will recommend the effort to save the species through properly managed captive propagation.

« Is the Blood Python as mean as people say?
The Production of the Albino Ball Python and Its Morph Combos »