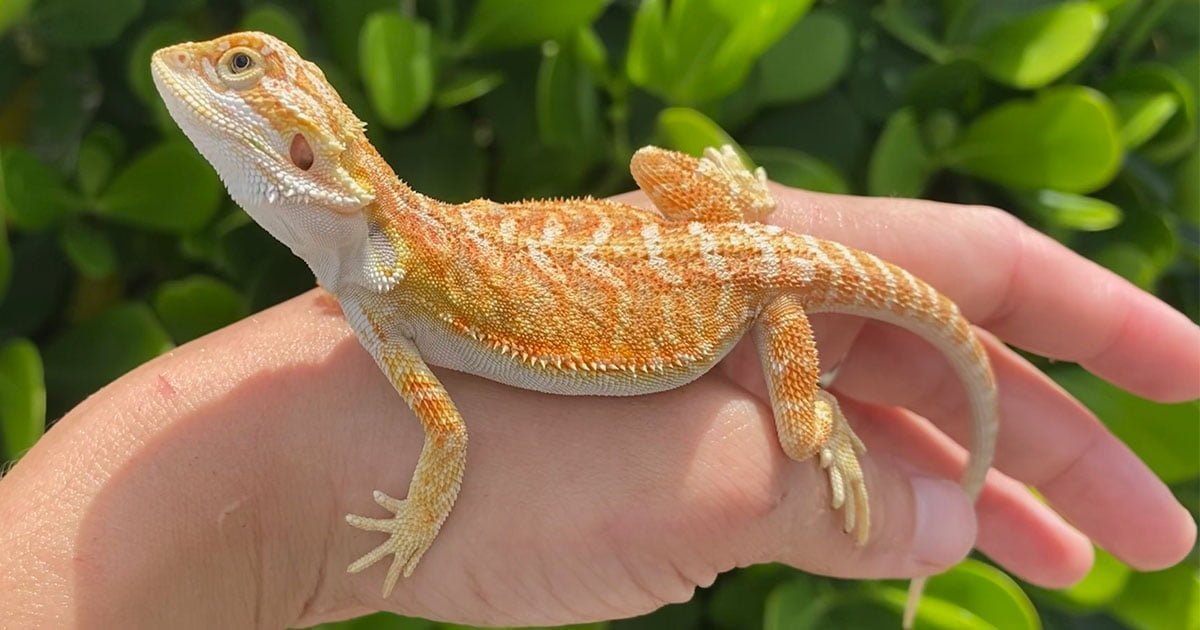 There are many bearded dragon facts, such as bearded dragons are one of the most popular pet reptiles of all time. A unique combination of being beginner-friendly without being boring, bearded dragons possess plenty of other just-right qualities making them the Goldilocks of reptiles. There’s enough variation in their appearance to keep things interesting, but not so many that it becomes overwhelming trying to pick which one you want. They live long enough to build a substantial bond, but not so long that they’re a potentially burdensome commitment. Keep reading for all sorts of fun bearded dragon facts that will have these spiky lizards at the top of your “want” list.

The Different Types of Bearded Dragons

There are eight subspecies of bearded dragons, but only a handful of them that are routinely available as pets. The type most commonly sold and kept is Pogona vitticeps. As such, when someone refers to the “different types” of bearded dragons, they are most likely instead referring to different morphs.

Morphs are variations of an animal’s typical appearance. Albinism, a lack of dark pigmentation, for example, is a commonplace example of a morph that occurs throughout the animal kingdom. These variations can include things like an animal’s color, pattern, and size. These traits must be inheritable by the organisms’ offspring in order to truly be considered a morph. Otherwise, most variations in appearance are simply an abnormality.

Some morphs do happen naturally as the result of a genetic mutation (like albinism). In most cases, however, it is done intentionally through controlled breeding. This specific breeding of unique traits of appearance is a common practice amongst reptile keepers.

How Many Bearded Dragon Morphs Are There?

There are several bearded dragon morphs—a number that will likely continue to grow over the coming years. Certain morphs are more popular and rarer than others. Highly coveted morphs are likely to cost more than your standard beardies.

The original colors are greys,tans and browns. Some more fun bearded dragon facts: now, this lizard species is found in a spectrum of colors across the rainbow thanks to the ingenuity of dedicated breeders. Morphs can also include differences in scale size, texture, or pattern.

Red bearded dragons are the most sought-after of the morphs. They first appeared in the late 90s and have been immensely popular ever since. This vibrant color can occur naturally in the wild but only shows up in small patches, but an entirely red lizard is the result of careful and deliberate breeding. The shades and intensity of the reds can vary, with some being darker and brownish, while the others are orangey and bright. “Ruby reds” are a morph with the deepest shades of red. The price range for these beautiful morphs is modest and can start at $150. However, keep in mind that the brighter and bolder the color, the higher the cost is likely to be.

A bit of a misnomer, blue bearded dragons aren’t actually blue. Their namesake is derived from the blue of their internal organs which can be seen through their pale, translucent skin. This is why these lizards are also sometimes referred to as the translucent morph. The blue coloration is the most vivid in their infancy and fades as they age and mature. Dark pigments like blue, black, or purple are incredibly rare—borderline nonexistent. If you wanted a bearded dragon that resembled the sky or ocean, this is the closest you’ll probably get.

In addition to the blue bearded dragon’s unique paleness, this breed also has intensely dark black eyes rather than the typical golden hue. The blue or translucent morph is exceedingly rare and carries a corresponding price tag, which can start in the two hundreds.

The citrus bearded dragon is one of several yellow bearded dragon morphs. These include green, lemon fire, and sandfire gold, and the standard yellow. Citrus is the most popular among them with its dark reddish-orange stripes. Surprisingly, citrus hatchlings actually have a greenish color in their infancy. If they end up retaining their green color, these beardies are then considered—you guessed it—green bearded dragon morphs.

Unlike the other popular morphs based on color, the silky bearded dragon is named after texture. Also nicknamed ‘silkies’ or ‘silkbacks’, as their name implies, these lizards seemingly lack scales and instead have a smooth skin-like exterior. They do, in fact, have scales, however. Their scales are very small as a result of their breeding which creates the illusion of a scale-less body. Silkies are available in all colors. However, they tend to be more vibrant in their coloration due to their unique scale structure.

The leatherback bearded dragon is a close relation. These beardies lack the ridge of spikes that bearded dragons typically have due to smaller scales. Silkies are actually the product of breeding two leatherbacks together.

What To Expect When Owning One

The huge (and ever-increasing) popularity of bearded dragons is an asset to those wanting a cool-looking pet lizard. As demand increases, so too does the availability of once ultra-rare morphs because the industry then attracts more and more breeders. The conveniences of the modern digital age have also made buying reptiles easier than ever.

Knowing these bearded dragon facts, should you decide to get your own (which we strongly approve), you can expect a low-maintenance and surprisingly affectional pet that will live around 10-15 years. Bearded dragons are easy feeders with simple care requirements. You’ll only need the essential basics to get started such as a tank, substrate, uvb lighting and heating elements.