Finding Pet Tarantulas for Sale from the Brachypelma Genus 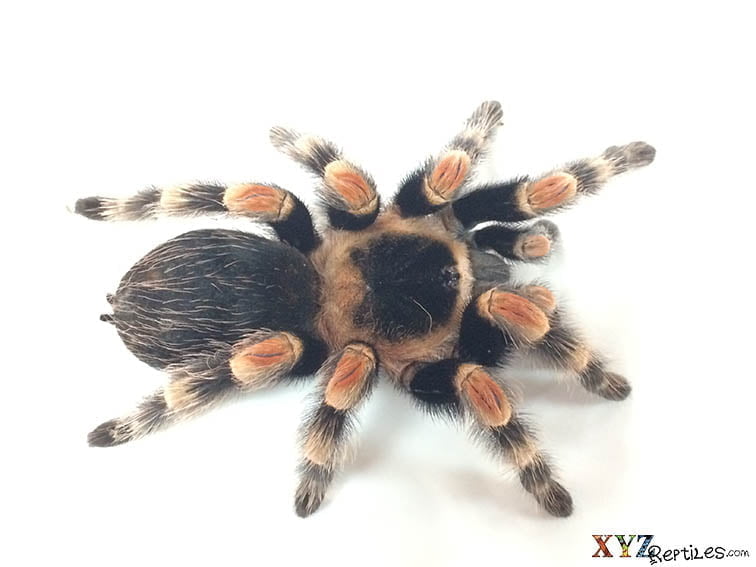 Tarantulas sometimes get a bad reputation due to their use in films as horror icons. Brachypelma smithi in particular is very often portrayed as a deadly, man-eating creature, even though this species is quite the opposite. They are one of the best pet tarantulas you could start off with as their temperament and care requirements are reasonably simple. However, as they are a part of the Brachypelma genus, tarantulas out of this genus in particular tend to be hair kickers.

Like fiber glass, the urticating hairs of a tarantula can cause irritation to the skin and discomfort if inhaled. The reactions to the hairs are very mild and nowhere near life threatening. Running the affected area under warm water will rinse off a majority of the hairs, while applying and peeling off a strip of masking tape will remove even more. Something you can do to avoid being “haired”, is gently prodding your tarantula with a paint brush prior to interacting with it as this will cause them to flick hairs onto the brush instead of your hand if they do not wish to be bothered at that moment. Tarantulas will sometimes kick hairs into their substrate in order to deter predators from sniffing them out, so wearing latex gloves during substrate changes is advised.

As the poster child for the tarantula hobby, the Mexican Red Knee tarantula (Brachypelma smithi) is a beautiful specimen with patterns of orange, black, and light brown throughout their body. Although not necessary, they are easily handled and make great pets. They inhabit both tropical and arid regions of the Mexico’s Pacific coast, burrowing underneath rocks and sometimes taking refuge in abandoned burrows made by rodents. This species has unfortunately become endangered and has been placed on the CITIES list to prohibit exportation of local species. Through captive husbandry, this species and many others have thrived in the homes of those who appreciate their existence, and have grown in numbers larger than the native population itself.

The Mexican Fireleg Tarantula and Other Species

From Red Knees to the Mexican Fireleg tarantula, the Brachypelma genus is jam packed with incredible species. This entire genus is easily cared for as their humidity requirements only call for percentages of 50-70%. This is easily maintainable by over flowing their water dish, once per week. From the scorching deserts to lush tropical forests, this genus is very capable of adapting to varying climates. Even though most Brachys are found throughout these regions in Mexico, the Mexican Red Rump (B. vagans) has become an invasive species, establishing itself in certain parts of Florida. Some species can be slightly more nervous, (i.e. Brachypelma boehmi/baumgarteni/vagans) while others are extremely docile and will let you pick them up without hesitation (i.e. Brachypelma smithi/albopilosum/albiceps). As noted earlier, this genus is famous for their hair kicking tendencies. However, picking up on their body signals can help you predict when they’re going to kick. Most will move abruptly, tense up, and or raise their abdomen prior to kicking to let you know when they are irritated. Simply end the interaction, close the enclosure, and attempt the interaction another day. You can find both of these pet tarantulas as well as some other customer favorites in our dedicated tarantulas for sale category at xyzReptiles .