Hog Nose Snakes as Pets and Their Various Morphs 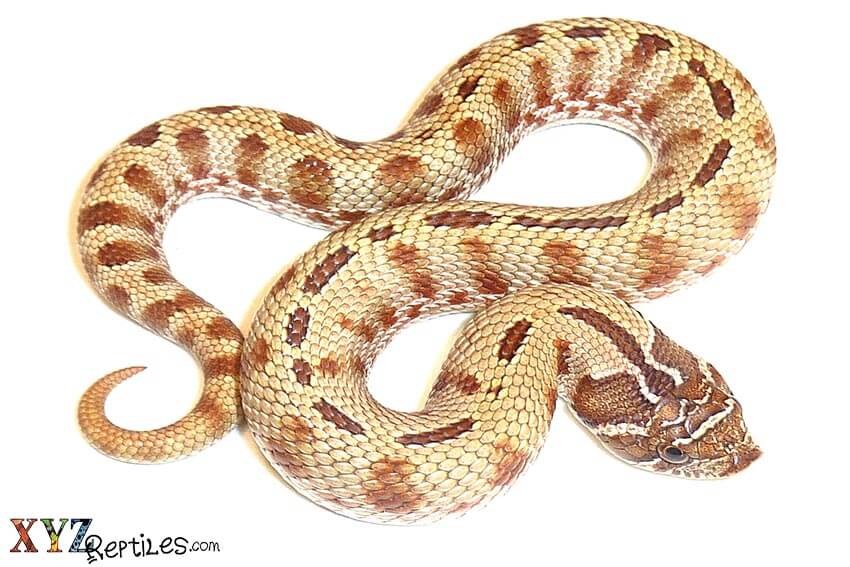 There are a few different colubrids from the unites states and abroad that are considered hog nose snakes even though they vary greatly in size, color, pattern and diet. They get their common name and their scientific name (Heterodon nascicus) from their upturned or pig like rostral scale. Like their close cousins from South America and Madagascar, all hog nose snakes use this physical adaptation to sift through leaves and other plant matter as they search for their prey items which include rodents, toads, and lizard eggs. The use it to burrow into soft sand and other debris as well. They vary in adult size from a smaller size of 24 inches to an impressive adult size of five feet. All hog nose snakes are rear fanged and have a mild toxin that they use to subdue their prey. They also utilize these fangs to hold on to their meal as they swallow it.

Part of the desirability of Western Hognose snakes as pets is their long list of behaviors that make them seem so much different and sets them apart from other snakes. They are known for a few traits including hissing, flattening their necks to appear larger and feigning attacks when cornered or threatened. Another strategy more often shown by the southern and eastern hog nose snakes is the fake death scene ritual. When confronted these snakes will roll over to their back and go through a mortifying writhing dance that ends with a motionless snake coiled up on its back with its mouth open and its tongue hanging out. The South American hognose also goes to the extent of mimicking a coral snake by having a colorful and ringed body pattern. When you look at all of these traits and behaviors it isn’t hard to see why they are fascinating little reptiles that go way beyond what you would expect from such a small snake.

Through selective breeding a few different morphs have been established in the western species and some of them are absolutely breath taking. Some of the most basic color mutations are the anerythristic, albino, hypo and caramel while the pattern mutations include anaconda and leucistic. By combining these traits breeders have been able to produce animals that are completely patternless and red, orange, grey, black or white at the same time. Although a couple of traits have been proven to cause defects at birth, most of the traits can be combined to make beautiful and healthy western hog nose color morphs. One of the more popular animals being sought by and imported into the Asian pet markets is the albino western hognose snake.

Other Hog Nose Snakes as Pets

The other types of hognose include the eastern and southern hog nose from North America, the tri colored hog nose from South America and the Madagascan Hognose snake from Madagascar. While there has been a large and expanding number of western hog nose in the pet trade for a few years, there is now a small but consistent number of captive born tri colored hogs available as well. The occasional gravid import female Madagascan will give keepers a chance to obtain captive born babies but almost all of the ones you see for sale are imported adults. At xyzReptiles we offer a small number of captive born and bred Western Hognose that are feeding and ready to be shipped at time of purchase. We are currently working with three different morphs but will work hard to bring you other mutations in the very n