Home > Reptile Articles > Is It Possible To Cross Breed Snakes?

Is It Possible To Cross Breed Snakes? 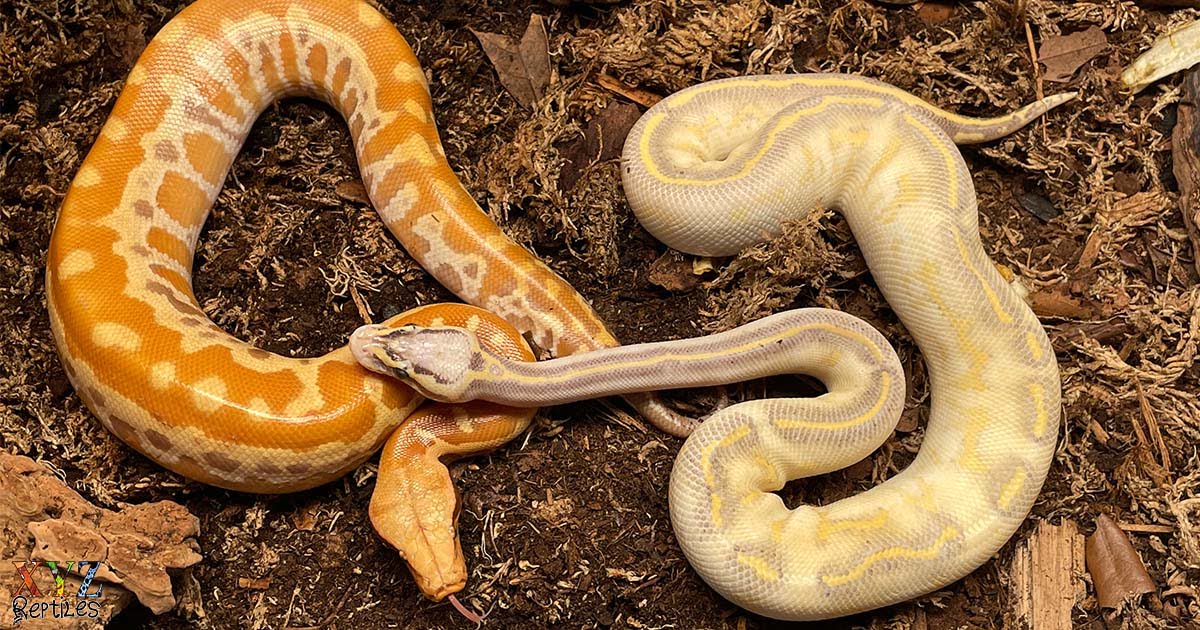 Yes, and not only is it possible to cross-breed snakes, but it’s fairly common and surprisingly easy. The results of these snake hybrids: Patterns and colorations unlike anything ever seen before. Certain snake species are easier to crossbreed than others. It can occur in the wild but it is an extremely rare occurrence and often accidental. In the vast majority of cases, crossbreeding is done intentionally (and very selectively) by breeders. The goal is to produce beautiful, never-before-seen kinds of snakes. But how does this work exactly?

What Are Snake Breeds?

When the crossbreeding of snakes is successful, it can result in a brand new snake hybrid. This is possible because the hybrid offspring of two different snake species often have the ability to reproduce. If a hybrid is able to create more of itself with similar features then voila! A new snake breed is born. To better understand the significance of this achievement, let’s look at the difference between a species, subspecies, and breed.

What Is A Species?

In animal kingdom classification, all snakes are classified in the suborder Serpentes. From there the taxonomy goes family, genus, and finally, species. A species is the most specific labeling an organism can have. This term is defined as a closely related group of organisms that have many similar characteristics and can interbreed and produce fertile offspring. Currently, it is estimated that there are more than 3,400 species of snakes.

What Is a Subspecies?

Subspecies classification doesn’t have the same concrete criteria as species, so it can be tricky. In most cases, an organism must vary in morphological characteristics and be able to breed with the “full” species without issue to be recognized as a subspecies. In many cases, subspecies arise due to geographical isolation which can cause unique survival adaptations.

What Is a Breed?

A breed is defined as when an organism has purposely been bred in order to preserve specific characteristics. A single species can contain several breeds (think: dogs). A breed is not a rank within biological taxonomy and is not recognized by biologists, No matter how wildly different the breeds make look or act, there simply aren’t enough biological differences for them to be considered distinct from the full species. Typically, it takes many hundreds of thousands of years for an organism to evolve into a new species. The artificial selection of crossbreeding falls under this category. While the results may generate totally new phenotypes (changes in physical characteristics), it is not enough to be biologically significant to be considered a subspecies.

How Do Snakes Breed?

Snakes breed through sexual intercourse. Males have a hemipenis and females have a cloaca that acts as a catch-all for both reproduction and eliminating waste. As is often the case in the animal kingdom, the male who can line up their genitals with the female fastest will win the right to mate. The story doesn’t end there, however, as the female has a significant amount of control over who she ultimately reproduces with.

The female snake has two pockets to store sperm: one for delayed reproduction, the other for immediate reproduction. These specialized pockets allow the female to mate with several males and choose which sperm she fertilizes. Amazingly, she can even have a litter of babies with different fathers. Snakes can give birth to live babies or lay eggs.

Motherhood is an involved process for female snakes. It can involve them going months without eating. These instincts can take quite a toll, and result in them sometimes losing up to half their body weight during egg incubation. For this reason, most female snake species only reproduce once or twice a year.

What Is The Difference Between Live Birth and Egg Laying?

Egg-laying (oviparity) is one of the earliest forms of animal reproduction that is commonplace with small, simple animals. A still-developing embryo exits its mothers body inside of a protective shell where it will continue to grow. Live birth (viviparity) is a form of reproduction that came about as animals became more complex. Despite the name, however, live birthing reptiles also deposit their young in a protective clear membrane/shell of an egg.

So how can you tell the difference between a snake using live birth or egg-laying? It all comes down to timing. A female who deposits her eggs early on is considered an egg-layer. One that deposits the embryos later in development is considered a live-bearer.

Can Two Different Snake Species Be Bred Together?

Most crossbred snakes come from the same genus. The many types of colubrids such as kingsnakes and corn snakes, for example, would be fairly easy to crossbreed. Hybrids with parents from two different genera are much rarer, but it is possible.

To successfully cross-breed snakes is a matter of timing (and a little bit of luck). It usually involves placing the male and a female snake of the same species together during their breeding season. Once the male has engaged in courtship behavior that female snake is swapped out for one of a different species. Crossbred snakes are indicated with an ‘x’ in their names.

Here are some examples made from popular snake varieties:

Snake husbandry is not always so straightforward, however. It’s imperative no one attempts to cross breed snakes other than an experienced breeder.

Have People Bred Different Snake Species Together Before?

The ready availability to cross breed snakes means that there are more hybrids in the exotic pet trade than ever. However, it is virtually impossible to tell whether you own a hybrid snake or not without a DNA test. Many hybrid snakes lead perfectly normal lives like their full-blood counterparts which can make it even more difficult to tell. The best way to ensure you are buying the snake you want is to work with responsible breeders (or an online reptile store that has great relationships with breeders) who can track a snake’s ancestry.