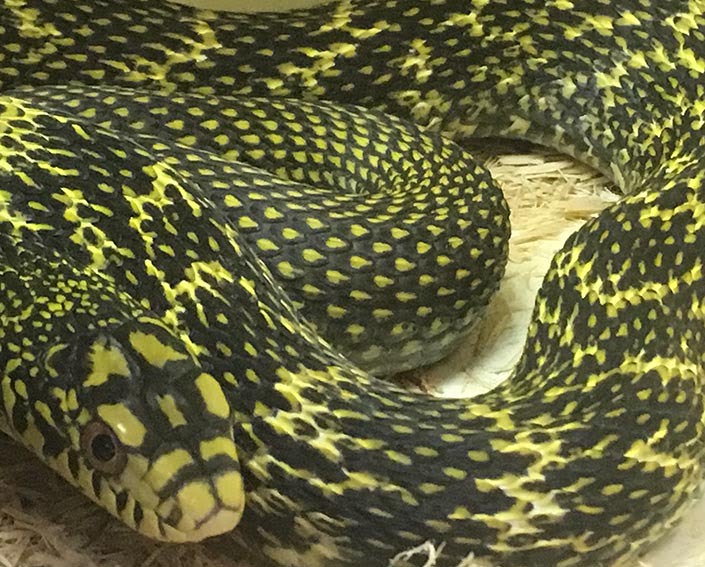 The Asian Rat Snake is hitting the US pet market with a strong force at a time when most colubrid species and colubrid morphs seem to have been played out. What seems to be triggering this interest is the natural beauty and unnatural adult size of some of these amazing animals. At an average adult length regularly exceeding 6 feet it is easy to see why they would generate so much interest. It is also good to note that most of the Asian Rat Snakes are now offered as captive born feeding juveniles and are available in color morphs as well.

The Chinese King Rat Snake aka the Stinking Goddess

The most sought after of the Asian rat snakes seems to be the Chinese King Rat Snake (Elaphe carinata) which can get to an impressive length of 8 feet in captivity. It is a keeled snake that originates from Northern Vietnam and China and is found in multiple morphs including hypo and albino. As a forest dwelling terrestrial snake this animal gets its nick name of “Stinking Goddess” from its ability to accurately deploy its anal scent gland with the slightest of provocations. Although they are a very active and in your face type of animal they are more bluff than bite and make for a very stimulating handling experience. They do get the title of King for their tendency to eat other snakes including their own kind so it is important to keep an eye on the behavior of these snakes during breeding encounters.

Another favorite animal in the exotic pet trade is the Beauty Rat Snake (Orthriophis taeniurus) which is known for its slender build, large size and regional diversity. Unlike the Chinese king rat these animals are smooth scaled and tend to be more arboreal calling for large upright cages with sturdy climbing surfaces. Some of the more popular sub species are the Taiwan Beauty, the Vietnamese Blue Beauty and the Thai cave dwelling rat snake. Most of the animals imported from the wild will tend to have trouble acclimating and display a bad temper but due to the diligent work of some US based breeders most of these animals can be found as captive born and feeding beauties.

The Bamboo Rat Snake aka the Mountain Racer

The other highly sought after group of Asian rat snakes is the Bamboo Rat Snake (Oreocryptophis porphyraceus) which is found throughout India, China, Vietnam and Indonesia. They are found in the cooler mountain elevations throughout the region and can come in a surprising variety of bright colors and patterns. The beauty and small size of this snake is a stark contrast to the giant rat snakes but once you have owned one of these ferocious little gems you will know what all the fuss is about. Again through hard work and captive breeding these once hard to find animals are readily available in the pet trade at a more and steadier pace and comfortably lower prices. At xyzReptiles we strive to keep a nicely diversified group of Asian Rat Snake species on hand and available for sale. Please contact us if you should have any questions regarding these perfect pet snakes.

« The Blue tongue skink is all the rage but do they make good pets?
Baby Savannah Monitor Lizards as pets – learn before you buy »