Home > Facts About Reptiles > What does a king snake look like? 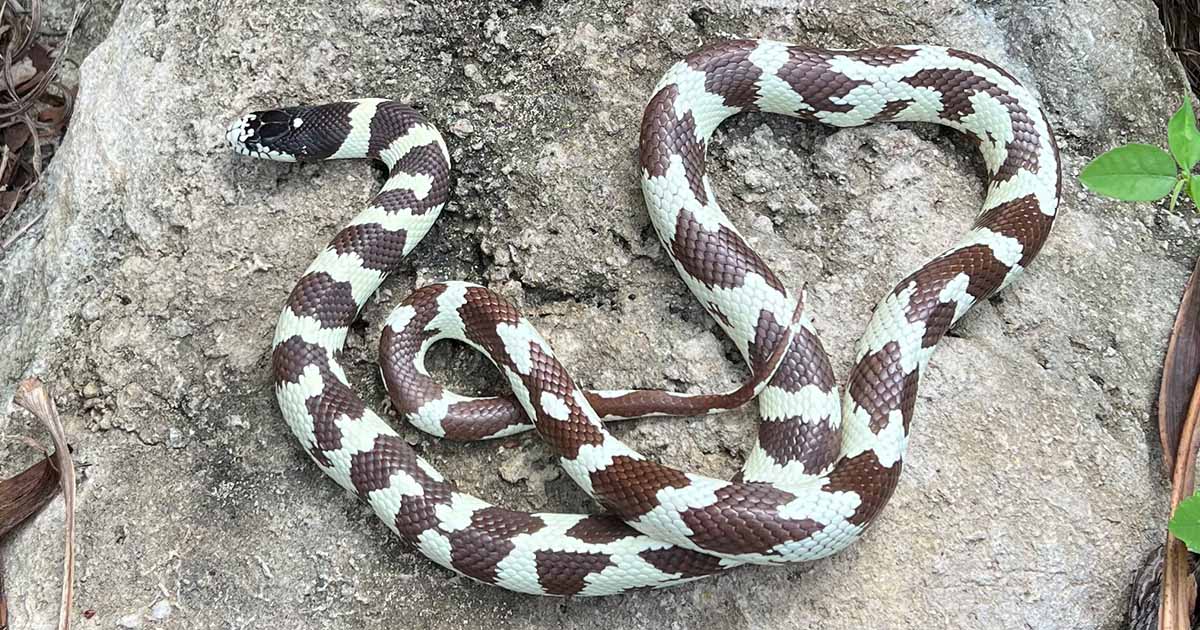 While king snakes remain sometimes overlooked (and underrated) in the pet trade compared to some of the bigger players, they deserve a second glance for anyone looking to own a new reptile. Like other constrictors, they are docile, friendly, low-key animals. However, chances are you may not quite know what a king snake looks like. After all, there is a wide variety in appearance with this particular snake. Even if you’ve previously seen a picture of one, you may not know the amazing potential that this group of snakes has.

Here, we will carefully examine the physical appearance of the king snake. From there, we look at why exactly it looks the way it does, and some common morphs you can see on the market.

The Physical Appearance of a King Snake

King snakes are a medium sized constrictor that grows to about five feet in length and approximately one lb. However, as hatchlings, they emerge from their eggs at a much smaller and more vulnerable 10-12 inches. The king snake may also look different as it ages, lightening with age and subtly changing markings.

These snakes generally vary in coloration, ranging from muted dark colors to bright oranges and reds. Many king snake varieties (namely the scarlet king snake) sport vibrant, bright markings as part of an intimidation tactic. Specifically, this is an attempt at mimicking the deadly coral snake, which has a similar vibrant pattern. If you encounter a reptile like this in the wild and see if the red and yellow rings are touching, it is a venomous coral snake. The head shape and color of these animals is also a good way to tell them apart. Coral snakes typically have black heads as opposed to red, and the king snake has a more elongated, down-turning snout.

Why Kingsnakes Look the Way They Do

This snake calls all variety of habitats across the United States and Mexico its home. From shrubs and swamps to deserts and fields, king snakes have proven themselves to be a fairly adaptable animal. Because of this, they have adapted to have a medium sized, strong body that is capable of traversing all sorts of landscapes. While they mainly stick to land, these snakes are adept swimmers and tree climbers.

While kingsnakes are known to have the typical diet of a snake its size (primarily feeding on small rodents, birds, amphibians, and lizards), they are known to also be ophiophagic. This essentially means that they regularly feed on other snakes. They even occasionally participate in cannibalism. Because of this, it is not advised that you house your king snake with any other snake outside of mating.

While you should always take care to keep your snake’s enclosure secure, it is especially important that you do so when other animals are in your house. If possible, take every measure you can to ensure that neither animal can escape.

What Does a King Snake Look Like: Morphs and Varieties

To answer “what does a king snake look like”, we have to consider that this is a reptile that can vary quite a bit in appearance. As previously stated, king snakes range all across the country. This means that there will be some differences between one region to another. Specifically, the Florida king snake tends to be slightly duller in color but larger than the Californian. Breeders have also refined the genetics of their lines to express certain colors and patterns in their morphs. While you can find some of the more “basic” or “wild type” varieties of king snake for 100$-150$, some of the rarer, flashier varieties are 200$+.

The Florida or eastern kingsnake sports more naturalistic browns and blacks than some of the other snakes on this list, and tend to have less prominent banding. This is in an attempt to blend in with their surroundings. This variety is also known to be slightly larger than its western counterpart, reaching around six feet.

The Californian or western kingsnake tends to show off with brighter blacks, yellows, reds, and oranges. This is likely an attempt to intimidate would-be predators.

The term “hypo” typically means the reduction or deletion of a certain gene’s process. In the context of snakes, it typically detonates that a certain color is removed or less visible on the pelt. This creates a more subdued, but still impressive effect.

As with all albino animals, these snakes have a total lack of black pigment. Both the Californian and Floridian varieties of kingsnake can sport this morph. Of course, banding size and patterning will vary from animal to animal.

The Brooks king snake a lighter, brighter version of what the Florida king snake looks like. It is an excellent option for those who want a pet with a more naturalistic appearance that still has pizzazz.

This morph has a stunning shiny, nearly iridescent black pelt. With solid black coloring throughout its body, it is hard to remain unimpressed by this showstopper.

While perhaps slightly less well known than some other commonly kept reptiles, the king snake is an excellent option for reptile owners of all experience levels. No matter what your king snake looks like, you will be able to enjoy the company of this unique, docile animal given a little bit of time and patience. That being said, it is still important to take the time to set yourself up for success before looking at kingsnakes for sale. Be sure that you have a quality setup available for it before it comes home. We would also advise that you establish a relationship with a quality exotic vet. Before you know it, you will have an intuitive understanding of your snake’s needs. You can look forward to a positive relationship for years to come.

« How long do ball pythons live?
How much does a milk snake cost? »